Different Types of Ultrasonic Transducers for Cleaning: How It Work?

Ultrasonic cleaning is defined as a high precision scrubbing action to dislodge ingrained dirt and grime from the surface of sensitive items that are inaccessible and are hard to clean by hand or brushes.

Being fitted in an ultrasonic cleaning device these Ultrasonic transducers operate on a set level of frequency generated by an oscillating diaphragm.

The cavitation process thus developed inside the machine pulls off all the stubborn soiled particles from the filthy material. 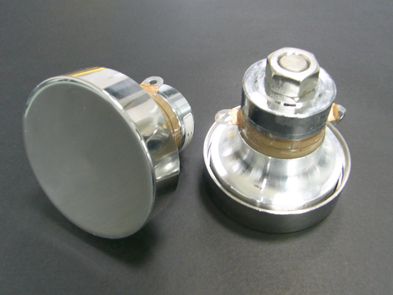 Ultrasonic transducers for cleaning are basically of two types – Magnetostrictive and Piezoelectric.

The transducers are held to an ultrasonic diaphragm which radiates frequencies and functions based on the system’s electrical efficiency.

The efficiency of the cleaning action may be a function of the constitution of both transducers.

Magnetostrictive ones are fundamentally electromagnets constructed of alloy or heavy nickel core with wire wrapped around it.

The pulsing of electrical current via the wires induces vibration in the core at a frequency which is equivalent to the ultrasonic generator’s output frequency.

This concurrence of frequencies brings about cleaning action inside the tank.

Piezoelectric variants are made up of titanate and lead zirconate. Titanate is a proven piezoelectric alloy that exhibits expansion and contraction when subjected to voltage and the electrical frequency at an appropriate level.

Ultrasonic Transducer for Cleaning: How It Works?

The efficaciousness of cleaning action is further determined by the bonding method of transducers and the electrical efficiency of the system.

Piezoelectric variants are held to the diaphragm with a metallurgic bond made up of a threaded and welded stud, and a high-temperature epoxy. Magnetostrictive ones employ vacuum soldering to bond the diaphragm with the transducer’s base.

The vacuum brazed ultrasonic transducers for cleaning has an edge above the epoxy bonded counterpart.

The later is highly vulnerable to an extremely abusive environment which can be characterized by the dropping of objects on to the diaphragm bringing about damage to the bond. However, transducers have been fortified against any such abuse.

Ultrasonic cleaning occurs when ultrasonic cavitation is produced in the cleansing fluid by the conversion of electrical energy into mechanical vibrations.

Piezoelectric transducers are highly efficient in converting almost the entire electrical current into mechanical vibrations and most transducers are constructed of this one.

Magnetostrictive ones owing to the bulky size of the generator have an energy efficiency of 50-60% only and may also call for air-conditioning to optimally maintain the temperature within.

The frequencies also play a vital role in determining the nature of the object to be cleaned through Ultrasonic cleaning. Low frequencies are deployed to clean cumbersome parts randomly which suffer from heavy contamination and they give rise to uneven cleaning action inside the tank.

Higher frequencies are responsible for the effective and evenly distributed cleansing action. Such frequencies possess the capability to thrash away dirt from minute blind holes, threaded regions, and other manually inaccessible regions.

The sound produced from the tank in ultrasonic transducers for cleaning will depend upon the strength and intensity of operating frequency.

Loud, audible noises can be muffled by providing for acoustic insulation for the reduction in decibel levels. Ultrasonic Transducer is the one-stop solution to all cleaning needs.

Purchasing a new set of hair clippers represents an investment, as you most likely expect to use the device for a long time. But hoping you will make the best out of it is not enough.

Your clippers need a bit of attention from your part so that you boost your grooming opportunities for an extended period.

Similar to other grooming devices, cleaning this machine is more than necessary.

So, if you are… Continue reading

How to Clean Lab Glassware (The Burette, Pipets and Flasks)

Cleaning stained laboratory glassware isn’t optional. For your own safety and the success of your experiment, you’ll want to make sure you know exactly how to clean the glassware in your lab.

In this guide, we’ll go over just how to do this so you’re prepared next time you need to do some lab cleaning.

But before we jump into the nitty-gritty, let’s first go over a few reasons why you need… Continue reading

How To Clean Old Ivory Jewelry?

The inherent beauty of ivory is prized around the world. Due to which it is being used for making various objects of decorative value for ages.

Commercially ivory is also used for manufacturing billiard balls, handles as well as items like piano and organ keys.

Ivory is also one of the most prized materials which are quite commonly used in jewelry making.